Salute to the masters of Chinese design and those burning souls!

Who can represent Chinese design? Here’s 2021 leaders of Chinese design celebrity. The past 40 years witnessed the process of Chinese design from germination, growth to the now blooming. Behind this milestone achievement lies a group of pioneers who dare to lead and create an era, experience and witness the rise of Chinese design. And so far, creativity has continued to shine in the mind of these thinkers.

These pioneers epitomize the thought of their fields and are well-deserved leaders. Since 2018, the selection of LEADERS OF CHINESE DESIGN CELEBRITY has become lighthouses in steering Chinese design to better directions from the past till the present and into the future.

In 2021, this tribute continued to develop. On December 11, during the Guangzhou Design Week Appreciation Dinner, also the award ceremony of Chinese Design Leaders List, the 2021 LEADERS OF CHINESE DESIGN CELEBRITY was finally announced. Four designers of different styles, with much glory and attention, came out with all guns blazing. Their remarkable achievements proved their contribution to the industry, which was celebrated with great ceremony.

Over the Pearl River

A grand drone show lit up the sky over the Pearl River and showed the scale of this ceremony. On December 7, under the auspices of Muli Group and Guangzhou Design Week, thousands of drones marked this special occasion by creating a drone matrix, which raised the curtain of the Chinese Design Leaders List award night.

Steve,Leung, T.K.CHU, Sherman Lin, Tino Kwan, Frank Jiang, JIANGUO MENG, Patrick Leung, kung shu-chang, YAOGUANG CHEN, JAMES TU, BEN WU, LIN CHEN, Alan Chan, and ALEX CHENG. As the names of former LEADERS OF CHINESE DESIGN CELEBRITY came out over the Pearl River, the city of Guangzhou showed not only her affirmation of these designers from a spiritual level, but also her tribute to the whole design industry.

With magnificent settings and changes in animations, the drone matrix solemnly lit up the slogan of "Homage to Chinese Design", and the name of designersworthy of this moment of glory. The night sky was lit up by flashes of light as the city and the glittering Pearl River witnessed this great celebration of joy after odyssey.

In the starlight, the names of the pioneers and thinkers of Chinese design, together with their works and wisdom, would long be remembered in the heart of those who follow their causes.

Leader of the Year

The 2021 LEADERS OF CHINESE DESIGN CELEBRITY was officially announced at the annual grand ceremony of "Homage to Chinese Design over the years". Four leading designers, Masayuki Kurokawa, Alan Chan, ALEX CHENG and LIN CHEN, won the 2021 Leader of the Year for their achievements in their respective fields, making them role models for their peers. 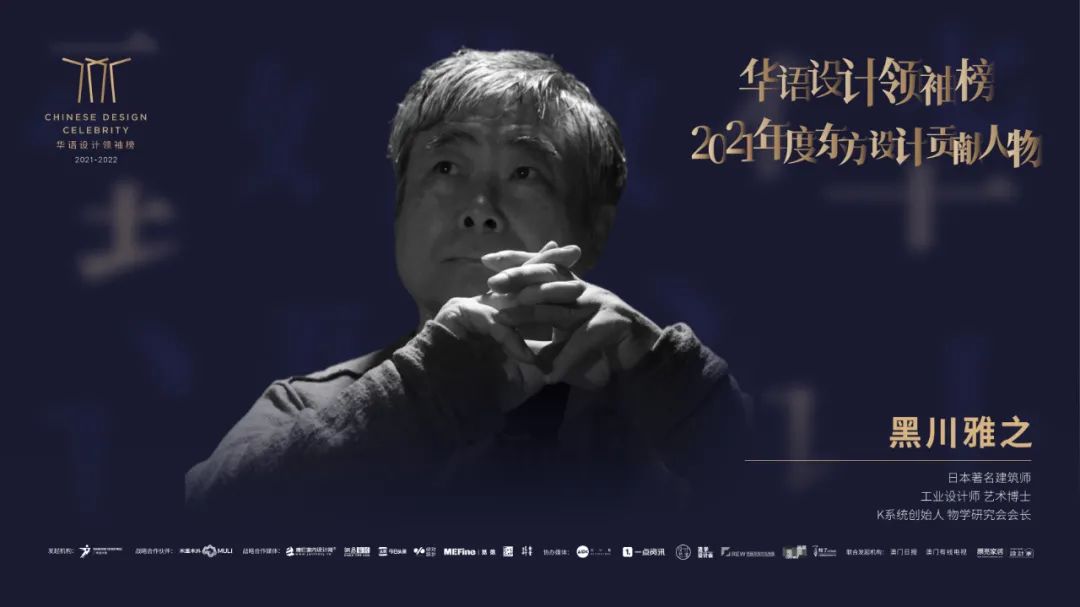 Starting from 2021, a special accolade will be added to the Chinese Design Leaders List - CONTRIBUTOR OF ORIENTAL DESIGN, which will be awarded to those who have made outstanding contributions to oriental design worldwide, regardless of nationality. This year, Masayuki Kurokawa, who is regarded as "Da Vinci in Tokyo" and the "godfather" of Japanese architecture and industrial design, was awarded the 2021 CONTRIBUTOR OF ORIENTAL DESIGN in the Chinese Design Leaders List.

A trophy, together with an ink scroll highlighting Oriental culture, embodied deep respect from Guangzhou Design Week and all guests present for Mr. Kurokawa's contribution to oriental design. He led the stars to shine on top of the mountain of design. He ignited the creativity of oriental design and showed it to the whole world.

If you want to ask the reason for awarding the CONTRIBUTOR OF ORIENTAL DESIGN to a non-Chinese designer, the answer lies in Mr. Masayuki Kurokawa's contribution to promoting Japanese aesthetics to China and even the world. Let us pay tribute to this true representative of aesthetic education. 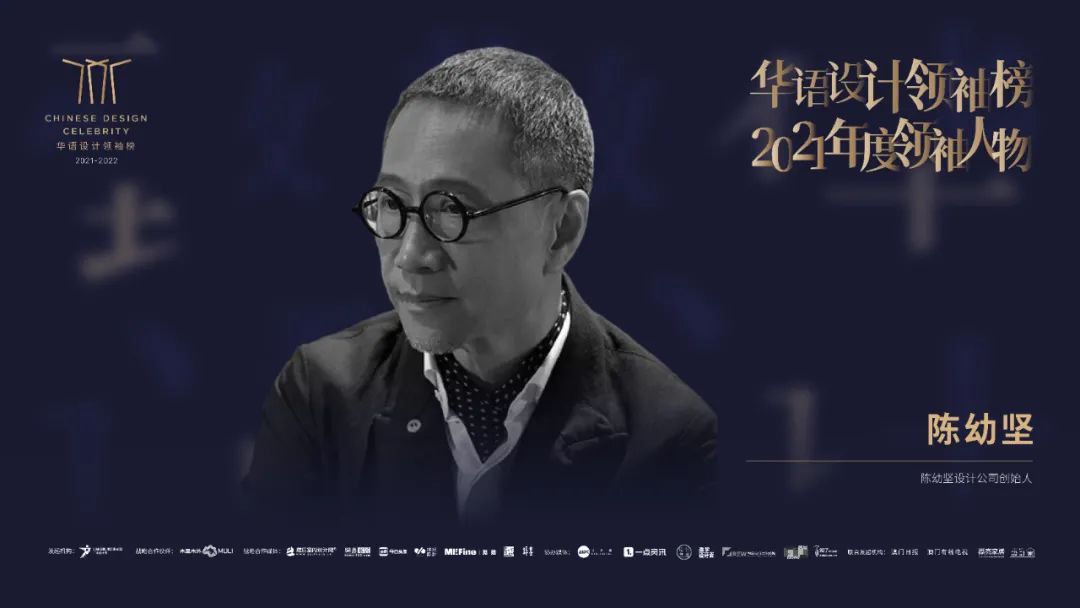 Mr. Alan Chan, "godfather" of Hong Kong design, is one of the most prestigious Chinese designers. With design works touching upon fields of advertising, graphics, space and products, Mr. Chen is truly a fashion leader and a cross-border living artist. In his half-century career, he has been striving ahead in all difficulties, with confidence and aplomb.

He combined the eastern culture with the western culture and almost redefined the concept of design using his own works. He showed "Oriental Passion & Western Harmony" to the world, a pride and joy for the whole Greater China. He takes art and design as his mission, having appreciated splendid mountains and rivers around the globe, but saying, "I was born in China and live for China". He deserves to be the LEADER OF CHINESE DESIGN CELEBRITY. 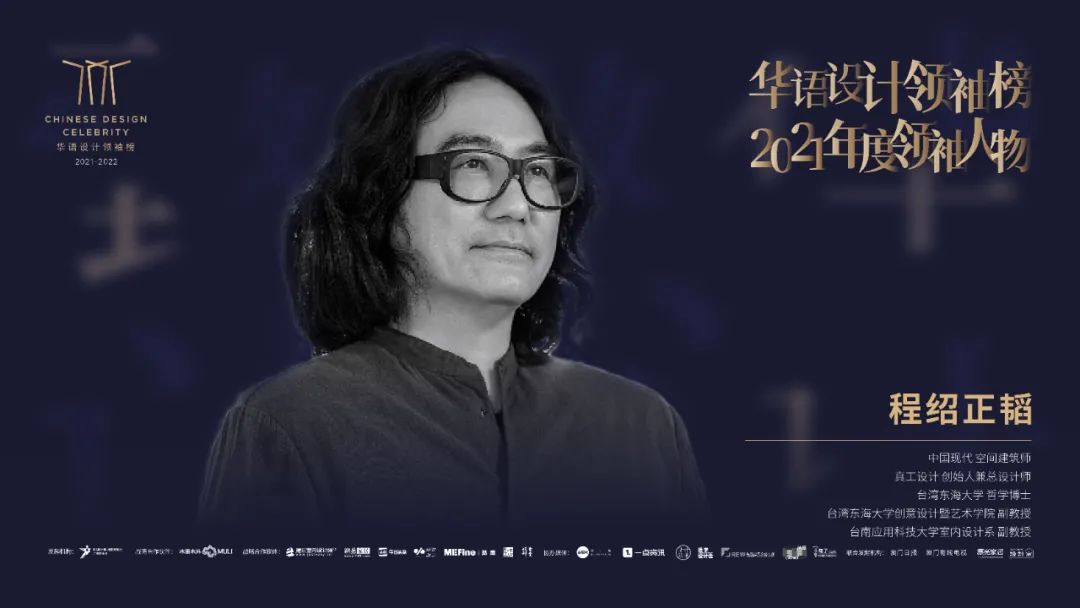 Mr. ALEX CHENG, university professor, space architect, artist and philosopher. He is regarded as a poet in the architecture & design field. He is an "ordinary man" who leads all living beings back to their nature, and a master of Orientalism in architectural interior design. As the first figure in 2021 LEADERS OF CHINESE DESIGN CELEBRITY, he has superb artistic talent and mellow cultural understandings. His multiple identities are interwoven and his rich ideas collide and develop. In the field of design, he has given us the best explanation of the concept of purity. 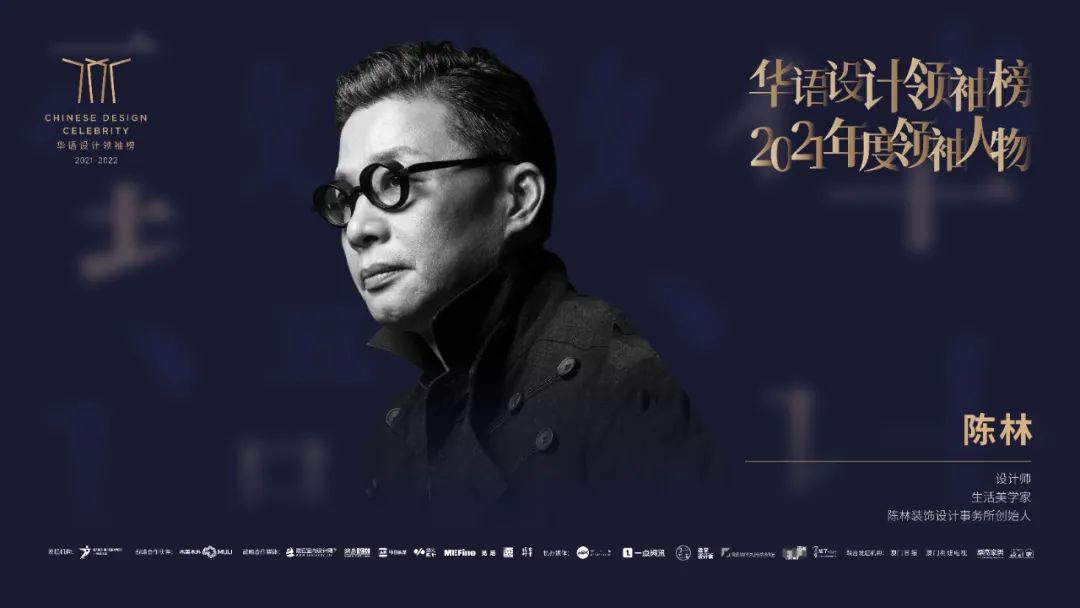 Mr. LIN CHEN, known as the "leader of design in the dining field", also 2021 LEADER OF CHINESE DESIGN CELEBRITY, is an outstanding figure in Hangzhou's dining and real estate field in the 21st century, and is the originator of exquisite restaurant design. As a first-generation explorer of China's interior design, he is bound to assume the role of a trailblazer. As China ushered in a new era, he wrote "dare to be the first" and "there's no making without breaking" in the keynote of his design career.

Masayuki Kurokawa, Alan Chan, ALEX CHENG and LIN CHEN, the four 2021 LEADERS OF CHINESE DESIGN CELEBRITY, are four shining stars that have profoundly influenced the history of Chinese design. On the lonely road that was once full of thorns and fog, each of them chose a misty track but with firm determination. The buds appearing at that time have brought in numerous design possibilities and grown into blossoms in the field of Chinese design.

Their past is a condensed picture depicting how they set precedents and the remarkable achievements that continuously light the way of future generations. Their aura not only represents the spirit of them as pioneers, but also shows their never-stopping explorations on tracks they have opened up. The inspiration that these leaders bring us is daring to be the first, to keep exploring, to keep thinking, and to continue the evolution of innovative design.

Those who kept running in the past were recorded in the stories of LEADERS OF CHINESE DESIGN CELEBRITY for the past years and witnessed by time. Stories about great people will also continue to be told, so that the warm flames still burning in those minds will eventually be seen by the world.

As a practitioner of the style of simple design, Steve,Leung has built his SLD into a successful designer company.

T.K.CHU has inaugurated the age of "NEO ART DECO". The design of his works continuously pushes boundaries and reinvents itself. A recent strategic layout was Qiu's win-win co-operation with Dong Yi Ri Sheng Home Decoration Group.

Leading professional designer Frank Jiang, has embarked on a new journey of making JATO Design the first listed private design company, a beacon of economic transition for the design industry.

Sherman Lin, first-generation academic master, explored another path from the Department of Fine Arts to Newsdays Architectural Design, and to retirement with full concentration on artistic creation, an ideal of career transition for designers and idealists.

These distinguished leaders, together with their promising career paths, have set a benchmark for followers now and in the years to come.

This is the evolution of design. These leaders have created unprecedented glory in Chinese design with their unique styles, pushing design from a cause rarely known by people into the limelight. This is also the evolution of an era, for there are countless routes lying in front of followers, each with flags and light and is no more lonely.

To quote from the great writer Lu Xun: "Hope cannot be said to exist, nor can it be said not to exist. It is just like the roads across the earth. For actually there were no roads to begin with, but when many people pass one way, a road is made." The metaphor of "road" in our context is self-evident. Let us all pay tribute to the pioneers' lonely and arduous past — it was their passion, mission, and determination that forged the glory of today's achievement.

Important timings of Chinese interior design are always easier to be recorded and remembered by history. The details of what happened during those timings are hidden in the story about Chinese design predecessors told by Mr. JIANGUO MENG, are recorded in the 40-year history of Dr. Patrick Leung's study of mainland design, are written in Mr. Tino Kwan's unique exploration of the field of lighting, and are reflected in Mr. kung shu-chang's research directions from designing, to design education, and to the topic of social design.

From winter to spring, from zero to one, from buds to blossoms, these pioneers of design witnessed the history of the industry's progress. The intention of this event, "Homage to Chinese Design Over the Years", was exactly to pay tribute to the present. When the story of Chinese design comes to a certain chapter, what remains is not only history of the past, but also regeneration of hope and ideas that are inspired between the lines.

YAOGUANG CHEN, a "lyric poet" in the design field, has pushed forward the unbounded development of interior design. Life artists, collectors, island owners and poets, all opened up unique routes for him to practice his design language.

How should we find a breakthrough in striking a balance between inheritance and innovation? Mr. BEN WU answered this question with reverence for both tradition and inclusion — introducing Oriental aesthetics to international modern design, which makes him a representative figure of Chinese design in the context of global design featuring diversity.

Those who reached the top never stopped climbing because they dwelled on exquisite flowers halfway up the mountain. New forces clash with wild design ideas, catalyzing chemical reactions in various forms. Idealists still have a long way to go in their design exploration, but with their persistence, they can always keep both feet on the ground facing every possibility and countless accessible paths. Compared with the title of "pioneer", we prefer to call the generation that pioneered Chinese interior design the "idealist". In that era when both material and spiritual resources were scarce, and when people were far away from the real design world, the idealists had already ignited their infinite curiosity and enthusiasm. Behind their deep loneliness, lies an enchanting world as vast as the constellations and beyond.

Gide once said that if our souls are worth something, it is because it has burned more fiercely than other souls. Looking back on the past, and in the name of the future, we salute the above masters of Chinese design and those burning souls!