Recently, Metal Century, a converging one-stop decentralized ecological platform, has attracted wide attention in the industry. While the DeFi3.0 age suddenly rises as a new force and the metaverse world comes here with overwhelming power, how should Meta Century stand out from those other platforms?

In August 2021, the founding Community Governance Toke (FCN) of the Meta Century highly carried on the spiritual nature of blockchain. And its rich community cultural deposits were preferred by a blockchain venture capital company, Blockchain Capital. It will empower Meta Century in recourses and businesses, which will help Metal century quicken the pace of ecological prosperity. 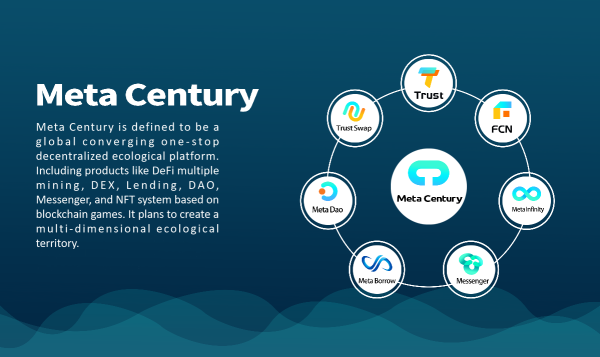 Based on community consensus, Meta Century puts forward the concept of DeFi new-generation converging one-stop decentralized ecology. It is with the characteristics of the ecological platform and system diversification. Also, it puts user interests in priority and collects multiple resources to promote value transfer and consolidate capital mobility and capital depth continuously, thus ensuring the continued participation and contribution of the community.

NO 2. TRUST—Meta Century's multi-revenue aggregation hub based on community autonomy. It's also the governance token of TrustSwap (decentralized exchange) in the Meta Century. What's more, it's a gateway to travel through the multiverse (Meta Infinity) in Meta Century.

NO 3. TrustSwap—Meta Century's next-generation decentralized aggregating DEX based on TRON. It will be the core kinetic energy engine of the Meta Century andextremely important infrastructure in the Meta Century.

NO 5. Meta Dao—Once established, they will work automatically and continue to perform their duties without interference from external sources. With weak control, sub-centers, autonomous mechanisms, network architecture, and coupling connections, etc, they are new social structures,business models, and interpersonal relationships in the era of the information society which are completely different from industrial society.

NO 6. Meta Messenger— A co-built and co-maintained meta-social ecosystem consisting of all nodes in the Meta century.